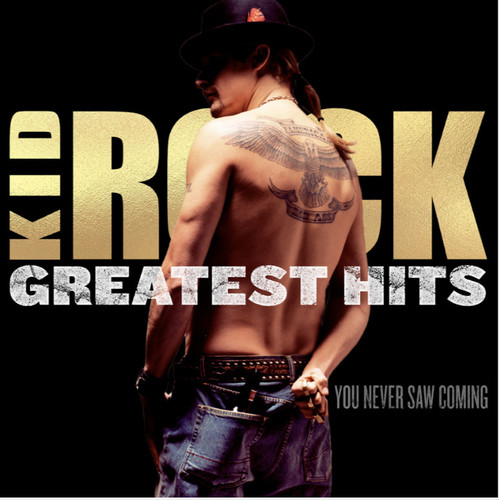 EDITED COVER. 2018 collection. Comprised of fifteen remastered tracks, all recorded since 1998, this powerhouse collection reflects 20 years of cross-genre hits from the superstar during his Warner Music Group era. The tracklisting plays out like the ultimate Kid Rock set, reflecting his indelible imprint on rock, country, pop, and hip-hop. Greatest Hits You Never Saw Coming represents an extensive vision of two decades of Kid Rock and speaks to his enduring popularity. Over his 25-year career, Kid Rock has been our Early Mornin' Stoned Pimp, the Devil Without a Cause, the Cowboy, the Bullgod, the Rock N Roll Jesus, the American Bad Ass and, lest we forget, a proud Son Of Detroit. He's released 7 top 10 albums, sold over 25 million albums worldwide, and collaborated with a diverse range of artists- Hank Williams Jr., Eminem, Tim McGraw, R. Kelly, Bob Seger, and Sheryl Crow, to name a few. Rock has built his career on his own terms every step of the way, breaking down boundaries between rap, rock, and country. In doing so, he's become one of the most iconic artists of his generation, who continues to surprise after nine studio albums.