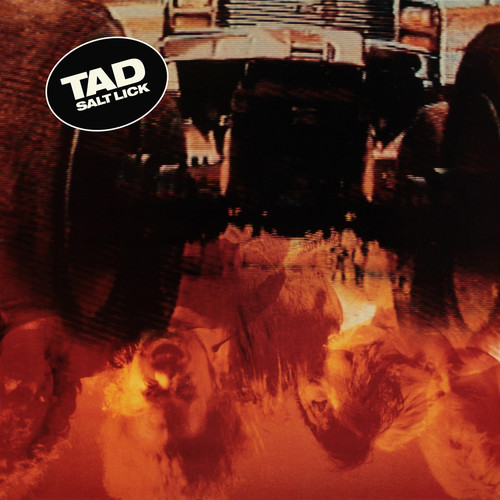 TAD was a mighty force in the late-‘80s/early-‘90s Seattle scene. Their heavy, churning rock/metal/punk buzz was a crucial part of Sub Pop’s early years, and, along with peers like Mudhoney, Nirvana, and Soundgarden, they defined the sound that reinvigorated the rock world in the early ‘90s. TAD was led by the physically imposing yet incredibly sweet singer/guitarist TAD Doyle, with bassist Kurt Danielson (ex-Bundle of Hiss), drummer Steve Wied, and guitarist Gary Thorstensen. With an image that sometimes cast the band as deranged lumberjacks, and influence from Head of David and Killdozer, TAD put a uniquely rain-and-fog-coated Northwest spin on ‘80s underground rock. The band released two albums and a few EPs on Sub Pop between 1988 and 1991, all of which are now lovingly remastered by the band’s friend and engineer Jack Endino (Soundgarden, Nirvana, Mudhoney, Screaming Trees) and repackaged with bonus tracks and expansive liner notes. After their 1989 debut album, God’s Balls, TAD continued to write and record, releasing a string of singles and the Salt Lick EP between 1989 and 1990. Salt Lick features the single “Wood Goblins,” the video for which MTV banned because it was, to the delicate eyes of MTV programmers, “too ugly.” The sounds of Salt Lick are, indeed, wonderfully ugly, thanks in part to the involvement of noise-rock technician Steve Albini (Big Black, Shellac, Nirvana, The Jesus Lizard), who recorded the EP. The band continued to release singles and gain momentum in the press. As TAD himself puts it: “Lyrically we had a lot of subject matter that was meant to be tongue in cheek from the beginning but had been presented by Sub Pop and ourselves as true-to-life. As a result, the press had taken it all seriously and began to feed on and ravenously devour the mythology that we had created.” This reissue of Salt Lick includes tracks from the “Wood Goblins” single, a split 7” with Pussy Galore, and the “Loser” 7”. This material has been out of print on vinyl/CD for many years, and this is its first digital release.
This website uses cookies to personalize content and analyse traffic in order to offer you a better experience.
I accept Learn More
back to top