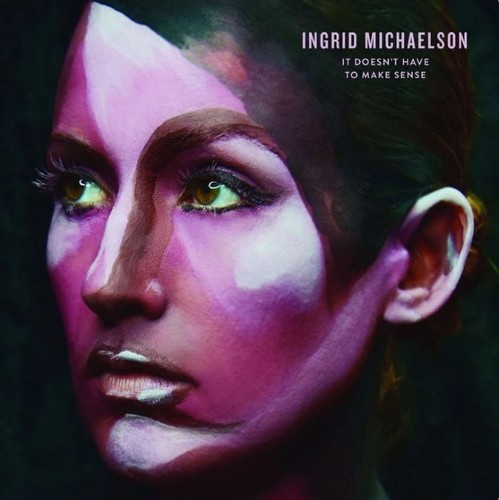 Vinyl LP pressing. To say Ingrid Michaelson is prolific is an understatement: In just a decade, she has released six albums (five of which have charted) and ten singles (eight charted). Her new album, the aptly named It Doesn't Have to Make Sense, is a powerfully honest time capsule of her undoings and rebirths. "Allowing myself to not try to make everything make sense was freeing for me," explains the New York-based singer. "Life doesn't always make sense." Previously, her glass-half-full outlook served her richly. It started with beautiful, idiosyncratic creations such as "The Way I Am" (2007) and "Maybe" (2009), songs that have breathed life into everything from Grey's Anatomy to an Old Navy ad and made a mark on the singles charts. The momentum never waned. Her last two albums, Human Againand the more contemplative Lights Out, both hit No. 5 on the Billboard charts. Though her last album teemed with melancholia, she introduced it with the uplifting hit "Girls Chase Boys." Similarly, the joyful "Hell No" is a gateway to the all-parts-of-the-buffalo It Doesn't Have to Make Sense. "There are heart-wrenching songs on it, but some are just fun for fun's sake," she says. "You can choose the path of darkness or you can choose the path of light. The record reflects a positive motion." "I think on Lights Out, I was learning how to let people in," she adds. "This time around, I kind of knew what I was getting into. I was just going into songwriting in such a different way - I was so unguarded." Which was a particularly gutsy leap of faith, since so much of It Doesn't Have to Make Sense, being inspired by her mom, is so close to her. Much of It Doesn't Have to Make Sense is Michaelson broadening her musicianship by endeavoring to communicate more through evocative sounds than her actual lyrics. While the album does not belabor any aural theme, it does make spectacular use of strings and harmony in it's gut-wrenching laments. In a sense, It Doesn't Have to Make Sense is an epic break-up album, in which Michaelson finally bids farewell to demons.