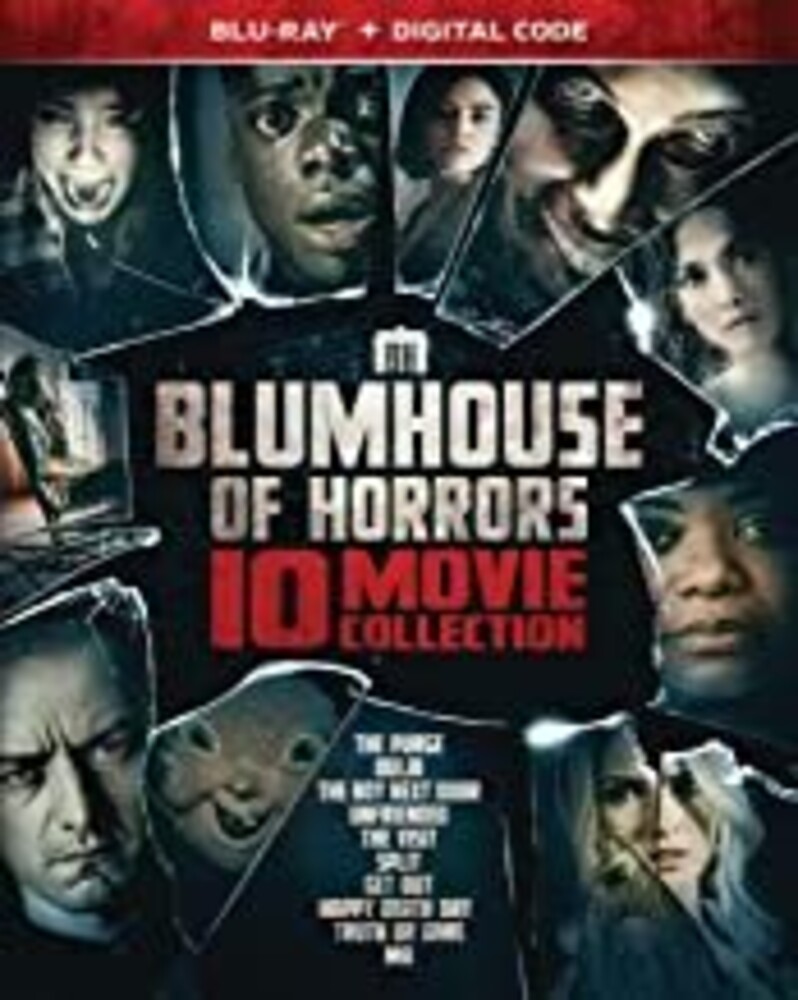 Ten-disc set includes: The Purge (2013)In the near future, the corporations that govern the United States have devised a way for citizens to release negative energy. It's called "the Purge," an annual 12-hour period during which all crimes are deemed legal. When James Sandin (Ethan Hawke) and his family provide sanctuary for a stranger in their locked-down home, they find themselves surrounded by bloodthirsty killers who want the man dead. Lena Headey, Max Burkholder also star in this terrifying sci-fi suspenser. 86 min. C/Rtg: R Ouija (2014)The shocking suicide of a young woman devoted to playing the famous supernatural board game brings together her grieving friends, who try to solve the mystery of her death by establishing contact with her spirit using her personal Ouija board. At first, their sĂ©ance appears to be successful... but they soon discover that opening the doorway to the netherworld can allow sinister forces to seize control. Olivia Cooke, Ana Coto, and Daren Kagasoff star. 90 min. C/Rtg: PG-13 Unfriended (2014)The cyber-shaming that led to a teen's suicide comes back to haunt her peers in this unconventional horror story told from the perspective of online video chatting. On the anniversary of the girl's death, her friends find their gab sessions on the web disrupted by an online user who claims to be their dead classmate; is it an elaborate prank, or a supernatural predator privy to their secrets and hungry for revenge? Heather Sossaman, Matthew Bohrer, and Renee Olstead star. 82 min. C/Rtg: R The Boy Next Door (2015)Separated from her husband, middle-aged high school teacher Claire (Jennifer Lopez) and her hunky, 19-year-old new neighbor, Noah (Ryan Guzman), have a steamy one-night stand. At least, that's what she thought it would be. Convinced they're meant to be together, young Ryan develops an unhealthy fixation on Claire that slowly turns into a dangerous-if not deadly-obsession. Kristin Chenoweth, Ian Nelson, and John Corbett also star in this sexually charged thriller. 91 min. C/Rtg: R The Visit (2015)In writer/director M. Night Shyamalan's chilling found-footage horror tale, young siblings Becca (Olivia DeJonge) and Tyler (Ed Oxenbould) go to spend a week at a remote farmhouse with grandparents (Peter McRobbie and Deanna Dunagan) they've never met. And when the strange behavior exhibited by the old folks becomes more and more sinister, the kids are soon fighting for their lives against Nana and Pop Pop. Kathryn Hahn co-stars. 94 min. C/Rtg: PG-13 Split (2016)A mesmerizing performance by James McAvoy drives writer/director M. Night Shyamalan's terrifying shocker. Three teenage girls (Anya Taylor-Joy, Haley Lu Richardson, Jessica Sula) are abducted by Kevin (McAvoy), a man with 23 distinct personalities. Now, they must desperately try to escape their disturbed captor, even as a 24th personality-one that possesses seemingly superhuman strength, speed, and durability-begins to emerge. Betty Buckley, Brad William Henke co-star. 117 min. C/Rtg: PG-13 Get Out (2017)Comedian Jordan Peele earned an Oscar for his screenplay for his directorial debut, an unusual and topical horror tale about Chris (Daniel Kaluuya), a young African American man about to meet his white girlfriend Rose's (Allison Williams) parents for the first time. The trip to Rose's family estate begins with some uncomfortable racial tension, but quickly turns into a fight for survival as Chris becomes the unwilling subject of a bizarre procedure that could cost him his mind. With Bradley Whitford, Catherine Keener. 103 min. C/Rtg: R Happy Death Day (2017)A slasher movie spin is put on "Groundhog Day" in this shocker focusing on Tree Gelbman (Jessica Rothe), a college student who is brutally murdered on her birthday. But when she wakes up alive and well, Tree realizes she's being forced to relive the same day over and over, and the only way to break the grisly cycle is to find out who killed her and why. Israel Broussard, Ruby Modine, Rachel Matthews, Charles Aitken also star. 96 min. C/Rtg: PG-13 Blumhouse's Truth Or Dare (2018)The klatch of college kids spring-breaking in Mexico should've left that creepy abandoned mission off their itinerary... because the seemingly innocuous round of "Truth or Dare" that they engaged in there has transformed into an unending curse, and an unshakable demonic entity is making sure that the truths are ever more devastating-and the dares are ever more dangerous! Unnerving shocker from Blumhouse stars Lucy Hale, Tyler Posey, Violett Beane, Landon Liboiron, Nolan Gerard Funk. PG-13-Rated version; 100 min./Unrated version; 101 min. C Ma (2019)When a group of small-town high schoolers buttonholed middle-aged veterinary aide Sue Ann (Octavia Spencer) to make a package store purchase, they were pleasantly surprised when the older woman offered up her home as a regular safe zone for them to party. However, it slowly becomes obvious that their clingy and demanding hostess has her issues... and when she snaps, the surprises will be anything but pleasant. Distinctive chiller co-stars Juliette Lewis, Luke Evans, Allison Janey, Missi Pyle. 99 min. C/Rtg: R