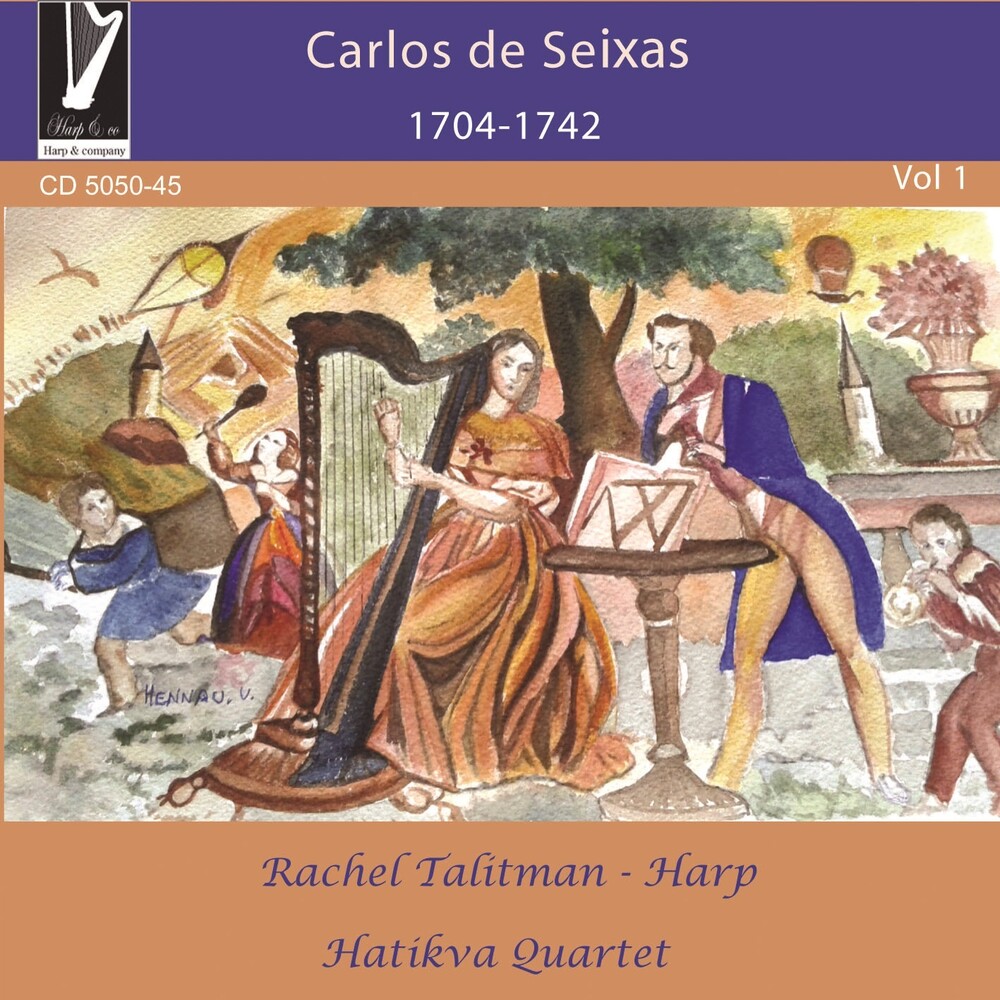 The first recording of works for the harp by Carlos de Seixas performed by Rachel Talitman and the Hatikva Quartet. The works were originally written for cembalo but have been adapted for the harp by Talitman. Jose Antonio Carlos Vaz 'de Seixas ' (Vaz was his real name) is an important figure in the European keyboard music of the beginning of the 18th-century. His father, Francisco Vaz, served as the cathedral organist in the local monastery of Santa Cruz. In 1718, a few days before his father's death, de Seixas succeeded his father as the cathedral organist. Two years later, he moved to Lisbon to take up his new position at the court of John V of Portugal as court organist and harpsichordist. In Lisbon, de Seixas met Italian composer Domenico Scarlatti, who was working in Portugal from 1719 to 1728 as appointed director of the court cathedral. In an account by Jose Mazza in his Diccionario biographico de Musicos portugueses e noticia das suas composicoes of 1780, the king's brother, Dom Antonio, arranged for Scarlatti to give de Seixas harpsichord lessons. Scarlatti, immediately recognizing de Seixas' talent, replied, "You can give me lessons. " He was knighted in 1738 by the king and inducted into the Order of Christ. Carlos de Seixas was the most prominent Portuguese composer and keyboard player of his day. He mainly wrote for the keyboard, particularly toccatas (sonatas), most of which have been lost. There are differing accounts about the number de Seixas produced, but it appears he composed over 700 sonatas in his short lifetime, of which fewer than 100 survive. There are various theories that attempt to explain the complete absence of de Seixas' original manuscripts, the most prominent being that all were lost in the earthquake that devastated Lisbon in 1755. Only copies of the composer's scores survive, probably representing only a fraction of his output. His music reveals an influence by Scarlatti, but his keyboard works generally feature simple harmonies and thus show a greater focus on thematic content. His sonatas, unlike Scarlatti's, are composed in one, two or three movements, in binary form, while similar sections are repeated. The themes and motifs are exposed in the first part of the sonatas, while the development of the second part of the sonatas and their structures often exhibit greater complexity. They are clearly constructed, always with new melodies, that demonstrate brilliant virtuosity, sometime auguring those of the Classical period. His most important influence was Italian, even before he met Scarlatti. The French influence appears in the ornamentation, and in the Minuets, like the French typical dances. On the other hand, the sonatas reflect the ambiguity of styles of this period of a transition between the baroque and classical. The Empfindsamer-style galant of this music embodies sensitivity, and places an emphasis on expressing emotions, especially in the Largos and Adagios, that lead to the classical era. Most of his sonatas have an original style with sparkling technical virtuosity that was imitated after his death. Carlos de Seixas is positioned in an important transitional period in the history of music.