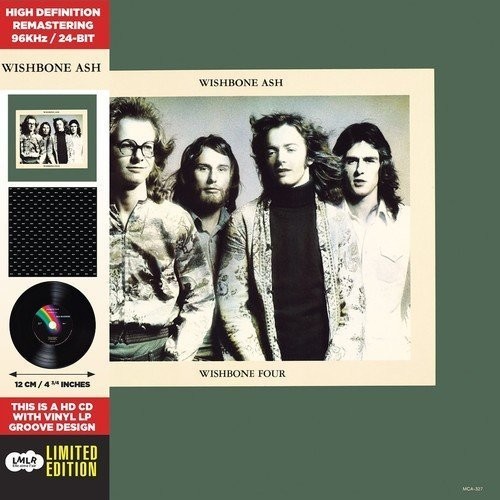 Digitally remastered edition in a mini replica of the original vinyl release. The CD has the original vinyl label printed on the disc, they have printed inner sleeves if the original LP came with one and they have remastered sound. Wishbone Four is the fourth studio album by British rock band Wishbone Ash, released in 1973. It was a departure from their previous album, Argus, in that it lacked that recording's overall cohesion and atmosphere and the loose conceptual framework of a stately, pastoral and warring medieval England. Containing only hints of the extended twin-lead guitar harmonies, Wishbone Four's stylistic variety found it's footing in acoustic folk elements in half of the eight-song set ("Ballad of the Beacon", "Everybody Needs a Friend", "Sorrel" and "Sing Out the Song"), two aggressive and melodic starters on each side of the vinyl release (Side 1: So Many Things to Say" and Side 2: "Doctor"), and the band's first use of horns on the semi-autobiographical "rave-up" touring song "No Easy Road".