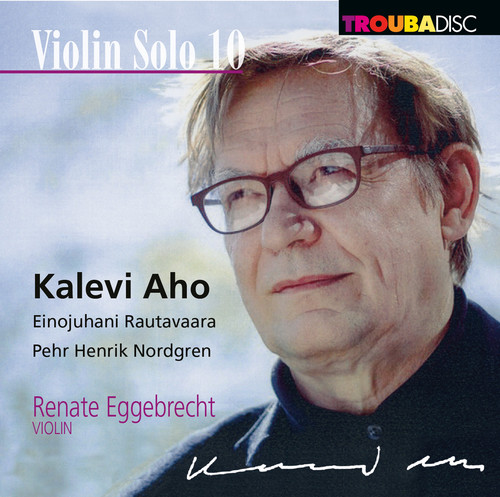 Kalevi Aho (b. 1949) forms the heart of this tenth volume of Renate Eggebrecht's series for unaccompanied violin. Here she takes up the cause of supremely expressive music by Finnish composers. Aho, like his compatriots Einojuhani and Nordgren, parted ways with the patriarch of Finland's national music, Jean Sibelius. Yet he too perpetuates the maverick willfulness of Finnish music, influenced not least by the country's national epic, the Kelevala. Indeed, the dichotomy between this tradition and his urgent desire to embrace new currents has had a formative impact on his creative output. Aho's Solo 1 dates from 1975. At first, tentative sustained pitches lure us into realms of refection and reverie in the manner of a prologue. Then the work plunges all the more emphatically into the tempestruous and clamorous. Yet it's provocative, far flung arcs of sound are more suggestive of inward struggles and emotional conflicts than external incidents or plot lines. One year after Aho's Solo 1, Einojuhani Rautavaara composed his Varietude for unaccompanied violin as a compulsory piece for the Sibelius Violin Competition in Helsinki. Here his characteristic plurality of stylistic devices bursts into dazzling turmoil, with lilting transmutations of dance gestures and madcap forays through an imaginary mental wilderness.
back to top