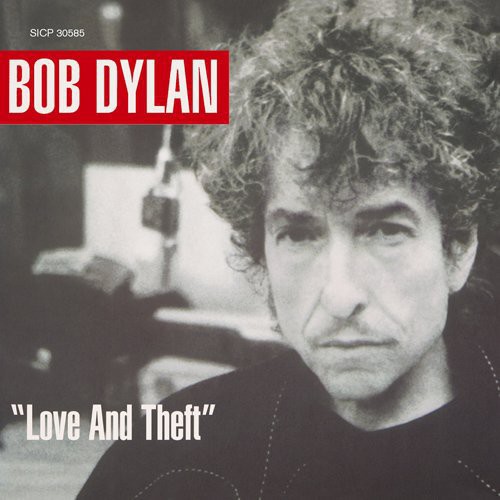 Japanese Blu-spec paper sleeve pressing. Features 2013 re-mastering. 2014. "Love and Theft" is the thirty-first studio album by American singer/songwriter Bob Dylan, released on September 11, 2001 by Columbia Records. It featured backing by his touring band of the time, with keyboardist Augie Meyers added for the sessions. It peaked at #5 on the Billboard 200, and has been certified with a gold album by the RIAA. The album continued Dylan's artistic comeback following 1997 's Time Out of Mind and was given an even more enthusiastic reception. Though often referred to without quotations, the correct title is "Love and Theft". The title of the album was apparently inspired by historian Eric Lott's book Love & Theft: Blackface Minstrelsy and the American Working Class, which was published in 1993. "Love and Theft becomes his Fables of the Reconstruction, to borrow an R.E.M. album title", writes Greg Kot in the Chicago Tribune (published September 11, 2001), "the myths, mysteries and folklore of the South as a backdrop for one of the finest Roots Rock albums ever made."