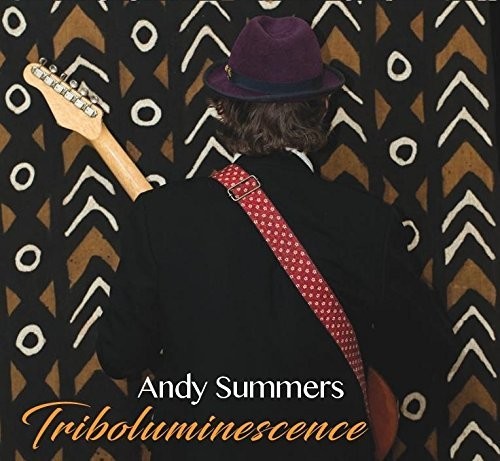 2017 release from the veteran British guitarist. Andy Summers rose to fame in the early 1980's as the guitarist of the multi-million record selling rock band - The Police. The Police were the #1 band of the time and dominated the music scene and the media in the '80s with several #1 records. Summers' innovative guitar playing created a new paradigm for guitarists in this period and has been widely imitated ever since. After the band's dramatic exit from the music scene, Summers continued to develop his interest in photography as well touring, recording as a solo artist, composing for films, writing books, and exhibiting his photography. Triboluminescence is the follow up recording by Andy Summers to his 2016 release Metal Dog. In this release, Summers once again delves into the deep exotic textures which characterized Metal Dog saying that part of his quest is always to find fresh if not alien sounds that avoid all the standard electric guitar clichés. "We are now living in a world of a billion guitarists" he says "so the struggle to swim upstream, sound different and make original music has become more difficult, but then maybe that is a good challenge. I play for an audience of one - yours truly. Maybe it's the music of narcissism-although that's not how I think of it- but I have to end up with something that I like outside of commercial concerns - but if you are in the game these days you face a barrage of likes and dislikes. Everyone is a critic now...". But if Summers takes a position on his music he proves it with the disparate exotic threads and lyricism heard on the tracks of Triboluminescence - generated from non-standard tunings hammered guitars in tandem, looping, baritone guitar, terz guitar percussion and fretless bass and cello. Summers plays all instruments on the album apart from cello by Artyom Manukian