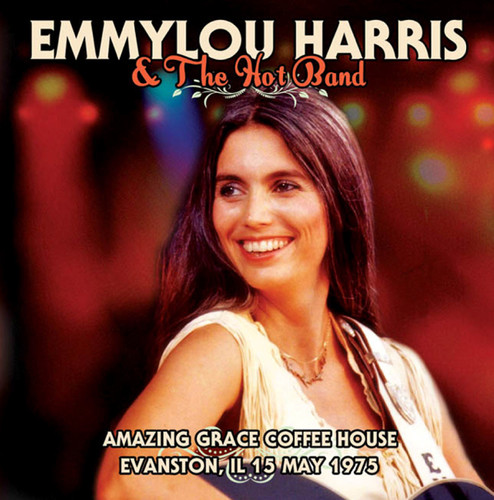 1975 was a bold and exciting time for Emmylou Harris, whose career itself was burgeoning with the release of her second album, Pieces of the Sky, released five years after her 1970 debut, Gliding Bird, on Jubilee. A revised energy with Reprise would inspire a third album, Elite Hotel, recorded in June 1975 and released in December of that year. Her appearance at The Amazing Grace Coffee House on May 15, 1975, consists of material drawn from her two 1975 albums. From the very beginning, Harris set high standards for herself, as well as the musicians she would work with. Her integrity and artistic ability led her to transcend the country-rock genre, becoming universally respected by fellow artists and music fans alike. Her Amazing Grace Coffee House appearance in May 1975 captures Harris at her peak. Many of the most enduring songs from both of her 1975 albums were featured in her sets from this time. Her interpretations of highly recognizable country standards, such as Buck Owens's "Together Again," Hank Williams's "Jambalaya," and Merle Haggard's "Tonight the Bottle Let Me Down" all compare favorably with the originals, proving that Harris was quite capable of taking a classic and making it her own. Echoes proudly presents the complete WXRT-FM broadcast of Emmylou Harris's May 1975 performance at The Amazing Grace Coffee House, Evanston, IL. Digitally remastered sound with background liners and rare photos.