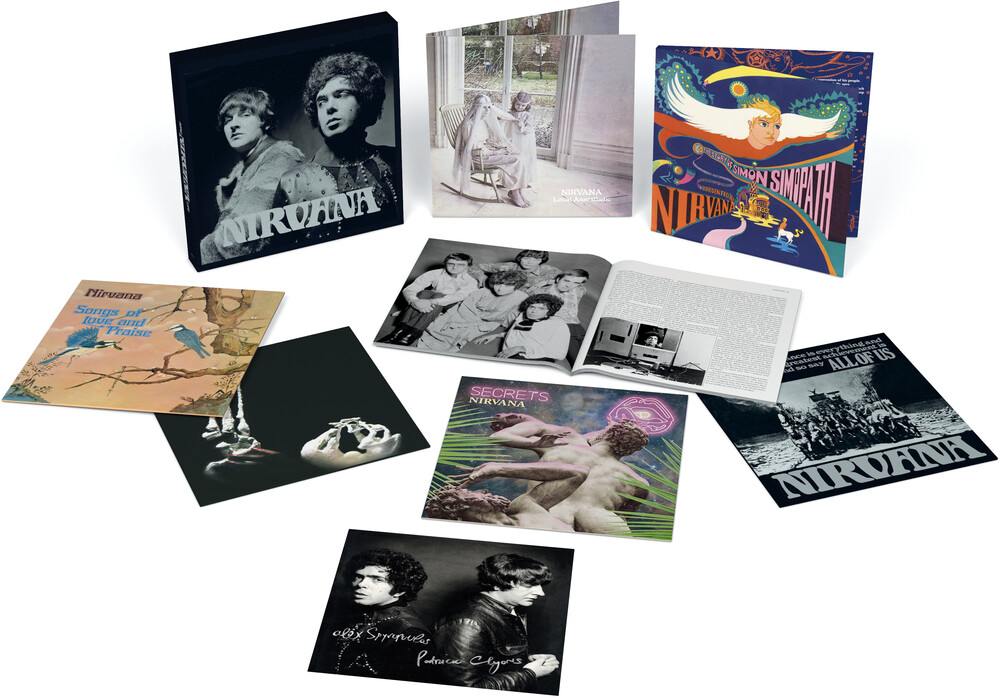 Madfish are proud to unveil: Nirvana 'Songlife' 1967-72, a 6 LP vinyl Deluxe Box Set Limited edition 1000 only worldwide pressing. Housing all 5 of the band's pioneering studio albums - 'The Story Of Simon Simopath', 'All Of Us', 'Dedicated To Markos III aka Black Flower', 'Local Anaesthetic', 'Songs Of Love And Praise' - alongside the never before released 1972 LP 'Secrets'. Nirvana were essentially the duo of Irishman Patrick Campbell-Lyons and Greek Alex Spyropoulos - who, following a chance meeting in London during the summer of 1966, took a long, strange trip togetherIt's the first time the band's recorded output has ever been collated together on one release and is an engrossing body of work to explore. These albums sit comfortably with some of the other great works of the time - the Zombies, The Kinks and the Pretty Things included. And whilst Nirvana are most famous for their British psychedelic classic 'Rainbow Chaser', as the music contained here displays, there was so much more to them than just that celebrated single, for they reached far and wide into the musical stratosphere with a technicolour vision. Four of the original albums have been remastered from their original ÂĽ inch tapes and the box itself comes with a 52-page booklet featuring liner notes from renowned author Peter Doggett, interviews with Patrick & Alex from Nirvana, full discography, rare newspaper clippings, previously unseen photos, posters and sleeves, and an exclusive Gered Mankowitz print signed individually by the band. Of key interest to fans will be the 'Secrets' album which was only recently unearthed in it's entirety, it's origins began as a musical score that Nirvana had planned on bringing to London's Theatres and stages in the early Seventies. Nirvana's story remains a wonderful tale of artistic ambition and entwined within it lies a roll call of supporting cast heroes that includes The Jimi Hendrix Experience, Traffic, Chris Blackwell, Salvador Dali, Francoise Hardy, Tony Visconti, and many more. The enduring beauty of Nirvana is, that over 5 decades since their paths crossed, Patrick and Alex remain good friends to this day with both of them residing in Greece. Says Patrick Campbell-Lyons, "Now, as young elderly men, I can say with pride and joy that our friendship is as strong as it was fifty years ago. We see each other often, here in Athens, and respect each other's creative space. And once in a while we write and record a new song together. Those moments are special, like our friendship. "