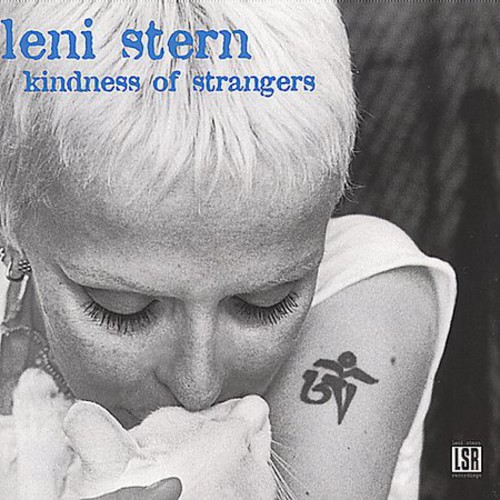 Originally from Germany, guitarist/ vocalist /composer/ orchestrator LENI STERN is a formidable woman: uncompromising artist, businesswoman, cancer survivor and social advocate. She is also one of the foremost female musicians performing today. In her 15 year recording career, Leni has been recognized five consecutive times as the Gibson Female Guitarist of the Year and her new album, Kindness of Strangers - released on her own label - may be the work that catapults her to well-deserved recognition as one of the most complete, affecting musicians performing today. '(the) balance of music and lyrics heard on Kindness of Strangers impressively illustrates how she continues to hone and deepen an already-impressive body of work' - (National Public Radio 'All Things Considered') 'Stern has developed into one of the most interesting fuses of pop songwriting and jazz instincts since Joni Mitchell.' - (Boston Phoenix) 'Although some unfortunate audiences still don't know it, Leni Stern has distinguished herself as one of the preeminent composers on the modern scene matched only by her sublime guitar skills.' - (Jazz Times) Personal Background Born in Munich, Germany, Leni started playing piano at the age of six and guitar at eleven. At seventeen, she formed her own acting company. Her radical productions sold out houses across Europe and attracted press and TV coverage. In 1977, Stern turned her attention to music and left for America to study film scoring at the Berklee College of Music in Boston (It was here where she met her husband of 20 years, Mike Stern, guitarist of renown himself who formerly played with Miles Davis). Film scoring gave way to her love for guitar and in 1981, Stern moved to New York City to play in a variety of rock and jazz bands. In 1983, Leni formed a group of her own with Paul Motion on drums, and Bill Frisell on guitar. In 1985, she released Clairvoyant, the first of twelve solo recordings. It was around this time as well that Leni discovered her breast cancer - now in remission - and underwent chemotherapy as well as alternative treatments, meditating in the Tibetan tradition and playing music to save her life. It worked - although most in her women's support group were not so lucky. Leni dedicated many songs from that period on to the memory of these women. Starting to Sing On her 1996 duet album with guitarist Wayne Krantz, Separate Cages, Leni unveiled her very personal vocal style for the first time on record. On 1997's Black Guitar - her first full-length vocal release - she delved even further into her unique songwriting. 1998's Recollection featured five new vocal songs, showcasing even more the songwriter sensibility that has been dubbed 'folk-jazz.' Her new album Kindness of Strangers probably provides the most striking insight into her vocal style and full artistic vision and is the apex of her brilliant Businesswoman In 1997, Leni added a new feather to her already crowded cap when she decided to start her own label, the appropriately titled Leni Stern Recordings (LSR). Black Guitar was the label's first effort, followed by Recollection, 1998's critically acclaimed retrospective which earned her a Top Ten of the Year listing from Billboard Magazine and was featured in Performing Songwriters D.I.Y.) The 1999 vinyl-only single For The Kindness Of Strangers followed and now the full length CD, Kindness Of Strangers. LSR will continue to put out her music as well as other records from the most creative voices from the New York music scene. Center of Consciousness: Bombing in Bologna, ITALY Kindness Of Strangers is Leni's first full-length album of new material in three years and finds her achieving yet another new artistic level: orchestrator. Featuring eight new songs, framed in a lush orchestral setting, the music astounds the listener with both it's beauty and it's meaningful impact. The album's centerpiece, the epic mini-concerto 'Vedo Il Tuo Viso (I See Your Face),' was commissioned for the Agosto 2 festival held annually in Bologna, Italy. The festival commemorates a neo-facist terrorist attack in a train station which left 85 people dead - mostly children - and more than 160 seriously injured. As Leni writes in her liner notes, 'I wrote the song when I discovered the story of Marco, a six-year- old who had half of his face ripped apart by the explosion. He grew up to be a famous painter... Marco's father sent me a pile of books that had been written over the years about the events of August 2nd. Among them was a transcript from the trial that showed...photographs of most of the victims along with a list of names. Some 80 little faces lay over my scoring paper as I wrote the last movement by setting their names to music. This piece is dedicated to them.' The CD also features the new songs, 'I Call You', 'Rescue My Heart', 'Carry Me', 'Resonance', and the title track 'Kindness Of Strangers,' which Leni wrote after encountering a homeless man on Madison Avenue in her hometown of New York City. This is music in the vein of Pat Metheny's 'Secret Story', Gil Evans' work with Sting, as well as Steely Dan and Joni Mitchell. Then again, Leni Stern belongs in her own category.
This website uses cookies to personalize content and analyse traffic in order to offer you a better experience.
I accept Learn More
back to top