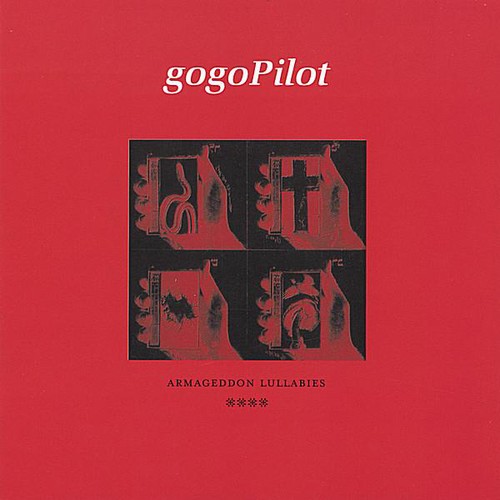 Gogopilot is an indie rock outfit form Charlotte, NC. The band formed in 2003, as a mostly acoustic ensemble featuring pretty, melodic songs, eclectic instrumentation such as violin, cello, accordion, lap steel, and the standard bass guitar and drums. Over time, the sound has hardened a bit and has taken on more of a rock approach. Influences include a diverse range of artists ranging from the Beatles, Burt Bacharach and the Zombies to modern acts such as Wilco, Guidied By Voices, and Those Bastard Souls. Throw in a little post-punk influence like early Echo and The Bunnymen and Lloyd Cole and the Commotions and you end up in Gogopilot territory. The band is the brain-child of singer/songwriter/guitarist Jeffrey Williams, whose past projects have included Lodestar, Iodine and Cellophane. Though band members tend to fluctuate, the six song 'maxie-e.p.', Armageddon Lullabies, was primarily recorded with the help of guitarist and sidekick Chris Ravenscroft, drummer Chad Wilson, and bassist Chris Lonnon. Other musicians appearing on the record include Rodney Lanier (on lap steel, accordion, and guitar), Ben Kennedy (on cello and violin), Vance Carlisle (on piano), and Reeve Coobs (on vocal harmonies) and Chris Walldorf (on percussion). Produced by wunderkind, Joe Kuhlmann, the result is a c.d. that features strong song writing, melodic instrumentation and introspective songs about everything form the current political environment to very adult problems such as alcoholism, the drudgery of working life, relationships falling apart, and people watching in a European train stations... A cheery affair indeed!
This website uses cookies to personalize content and analyse traffic in order to offer you a better experience.
I accept Learn More
back to top