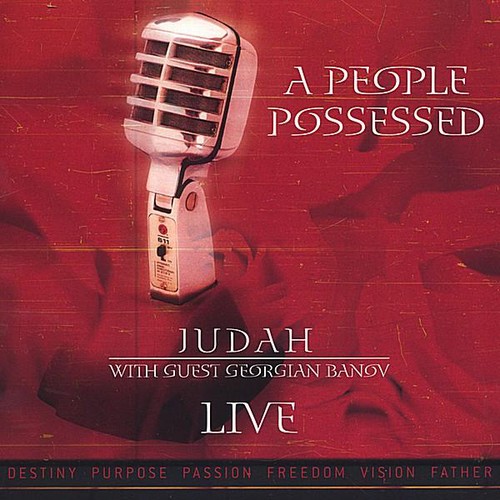 About Judah: The band Judah, led by Bill Themelaras, was formed in 1993 and is a cutting edge band specializing in high-energy passionate music incorporating several styles such as rock, alternative, instrumental, and spontaneous music. Judah's first recording River Ablaze, released September 1998, is a dynamic live project. It has many popular songs as well as a few originals making it a 'wild and loose' worship experience. River Ablaze is currently in over 15 nations. Judah's second recording A People Possessed was released in November 2000. It was also recorded live in order to capture the intensity of both the band and the audience. It was recorded with best selling international worship leader, Georgian Banov as special guest artist. Georgian, who lives in New Orleans, LA is from Bulgaria and is an accomplished violinist and guitarist. He travels extensively both in the U.S. and abroad and is known as the leader of the early Christian music band Silverwind. He was featured on the cover of the January 2001 issue of Charisma, a popular Christian magazine read by hundreds of thousands of people. This CD combines the leading of both Bill Themelaras and Georgian Banov. It contains much 'spontaneous' material which was unrehearsed and created during the worship. The overwhelming sense of freedom, intimacy, and joy is sure to captivate the listener. A People Possessed is a passionate expression of worship in the new millenium. About Bill Themelaras Lead Vocalist/Worship Leader: Bill Themelaras is a dynamic worship leader whose prophetic gifting creates moments of intimacy and joy with the Father. He seeks God's heart and desire during each moment, which allows each event to be a unique experience. His newest album Keep Me is a collection of songs written during different emotional experiences with the Lord. It was produced by best selling recording artist and producer, Kevin Prosch. The song Keep Me is dedicated to Bill's late father whose death was a result of the Persian Gulf War. It's prophetic sound creates a tunnel of worship that propels you to a deep place. Bill Themelaras was born and raised in the Wheeling, WV area. Though he was a product of a broken home, he was determined to find God's plan for his life. Bill began his walk with God in the United Methodist Church at an early age. He became involved with youth mission organizations and began leading teams of youth in evangelism. He then attended Praise Family Worship Center in Glen Dale, WV where God began to expand his areas of ministry with youth and music. His gifting and commitment ultimately allowed him to serve as the Youth Pastor and Worship Pastor for over 8 years. He continues to serve this generation both as a musician and speaker. Bill and his family are members of Covenant Church of Pittsburgh pastored by Bishop Joseph and Pastor Barbara Garlington. He leads several weekly worship services including prophetic and intercession meetings. Bill was the leader of the worship team Judah from 1995-2004, which traveled much and recorded two live albums. Their first recording River Ablaze, released September 1998, is a vibrant live project. It has many popular songs as well as a few originals. Judah's second recording A People Possessed was released in November 2000. It was also recorded live with international worship leader, Georgian Banov as a special guest artist. It contains much "spontaneous" music which was unrehearsed and created during worship. Along with his music career, Bill has been happily married to his wife Lynne for the past nine years and is the proud father of his daughter, Nia and his son, Cullen.
This website uses cookies to personalize content and analyse traffic in order to offer you a better experience.
I accept Learn More
back to top