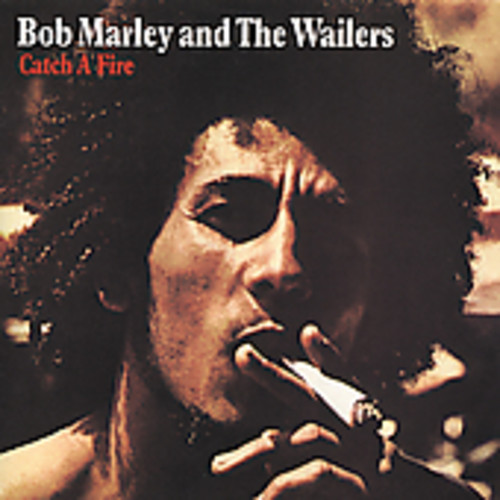 ''Catch a Fire'' is the major-label-debut album for Jamaican reggae band The Wailers, released on Island Records in 1973. The album established the band as international superstars. Leader Bob Marley in particular became world-famous. The socially aware lyrics and militant tone surprised many listeners, but others were attracted to songwriters Marley and Peter Tosh's confrontational subjects and optimistic view of a future free from oppression.

''Catch a Fire'' peaked at #171 and #51 on Billboard's (North America) Pop Albums and Black Albums charts respectively. It is number 123 on ''Rolling Stones list of the 500 greatest albums of all time, the second highest placement of the five Bob Marley albums on the list, after the posthumous compilation album Legend. It is also regarded as one of the top reggae albums of all time. - Wikipedia

The international debut (1972). While Curtis, Marvin, and Sly and Family Stone were dropping socio-conscious records onto American streets and as John Lennon and Cat Stevens sang of love and harmony onto the charts, a 27 year old Bob Marley took his version of unity and ghetto strife to the world. Bob and the Wailers had just received international distribution through Island Records. Label founder/producer Chris Blackwell got the record to the record buyers in the US and UK, breaking open an untapped reggae market. This record would go onto be the record that would catapult Bob’s international career and give him his first single “Stir It Up”. This was a guys band at this time and with it, the songwriting and attitude is maybe a bit more streetwise than later records…or maybe it was the internal competition. The following year, both Peter Tosh and Bunny Wailer would leave the Wailers and pursue their own careers. I’m sure that this was a record that influenced UK bands such as The Specials, Clash, English Beat, and the whole “rude boy” movement. The original version of Bob Marley and The Wailers were a tough looking bunch with musicianship to match. Recently remastered with 2 bonus tracks.