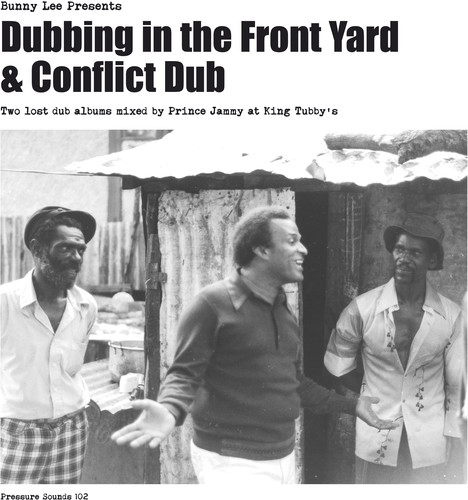 Bunny Lee as Producer, Prince Jammy as engineer, and The Aggrovators making the tracks: It is the Holy Trinity of Jamaican music. This release unearths two "lost" dub LPs - Dubbing in the Front Yard (1977) & Conflict Dub (1982) - featuring the triumvirate in perfect form. Both LPs were initially released in limited white label pressings and quickly disappeared into the mythic realm of the most hard-core reggae collectors. This release is the first-ever reissue of these sought after LPs, and contains all the original songs plus bonus tracks. A lush double pack CD with sleevnotes by Diggory Kenrick, amazing photos from the Director of the influential tv show 'Deep Roots Music' Howard Johnson, and features 3 bonus tracks, all remixes. Two are from Paolo 'Dubfiles' Baldini, featured on the Dubbing in the Front Yard CD, and the bonus track on Conflict Dub is by Diggory Kenrick.