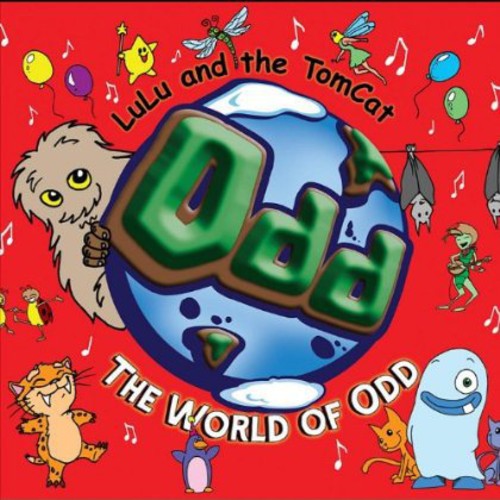 Winner of a Parents' Choice approved Award, and received a nomination for the Western Canadian Music Award... Meet a cuddly sasquatch, hear Puss in Boots sing his story, and bark with the cows in 'The World of Odd.' With story songs, crazy critters and tales of fantasy, kids will be singing along and getting active. No one can sit still for the Stand Sit game and songs just march along with the Ants, in this 18 song recording by the multilple award-winning, children's songwriting duo of LuLu and the Tomcat. 1. Hocus Pocus 2:14 Here's a song to put a little magic in your life. Haven't you always wondered what you would do if you had a magic wand? 2. Imagine That! 3:57 Say the magic words and become anything you can imagine. This great call-and-response song helps to pass the time on a car trip to adventure-land! 3. The Stand Sit Song 2:59 Stand up to bullies! Stand up when you hear the word 'stand' and sit when you hear the word 'sit' and you can join in the game. 4. The Grasshopper and the Ant 3:14 This engaging, well-known Jean de la Fontaine fable is retold with flair. But the ending may surprise you! 5. The Octopus Boogie 3:10 Get up and dance the Octopus Boogie with Ollie Octopus and her underwater friends. The actions are in the words so everyone can boogie! 6. The Bison of Snow 3:59 The Bison of Snow in the sky brings peace to the fighting beaver and hare clans. 7. I Met a Sasquatch 2:44 The Sasquatch is very shy but also super soft and cuddly. Here's the story of how LuLu and the Tomcat once met a sasquatch in Horndean, Manitoba. 8. Whoo Are You? 3:27 Have you ever tried to sound like an owl? Whoo... me? You can try to whoo too on your owling adventure! 9. Puss in Boots 5:14 All you really need in life's a cat. Puss in Boots sings about his adventures with the magical ogre and the brave princess! 10. The Ants Go Marching 3:39 Here's a new twist on an old story! Learn the real facts about ants through this rhythmic counting song as you march your way down to their colony together. (Live the song through the accompanying Sing-a-book's captivating pictures.) 11. The Saber-Tooth Poet 2:41 The saber-tooth cat is known for his bite but his rhymes are chiseled in the Ice Age! Find out why he lives to rhyme. Kids love the cute pictures in the accompanying Sing-a-book! 12. Pick Up Your Garbage 3:21 Let's help keep our world clean. Sing out loud to tell everyone to take care of the environment. 13. Teeny Tiny Boo 2:39 You'll love this Hallowe'en song with a teeny, tiny boo. Get to know the real 'Boo' in the accompanying Sing-a-Book. 14. Go, Go, Manipogo! 4:32 Manipogo is the name of a marine creature spotted in Lake Manitoba. It looks like a huge dragon with a head like a horse. Could it be a plesiosaur? 15. The Scroobious Pip 4:39 Edward Lear never finished this odd poem so LuLu and the Tomcat finished it. All the animals in the world discover a strange creature - part bird, beast, insect and fish. It's called the Scroobious Pip. 16. Ah, les crocodiles 3:58 Find out how the crocodile and the elephant learn to live together in this traditional French song. 17. The World of Odd 3:17 What an odd place for a school field trip! Play along with this active song by doing 'animal yoga' poses as you hear the animal's names and sounds. 18. Belle Isabelle 3:44 How do the stars light up at night? Belle Isabelle will lead you on her nighttime flight to the sky. As you hear her magical story of visiting the constellations, follow her journey through her own special Sing-a-book. The World of Odd.(Brief article)(Sound recording review) School Library Journal