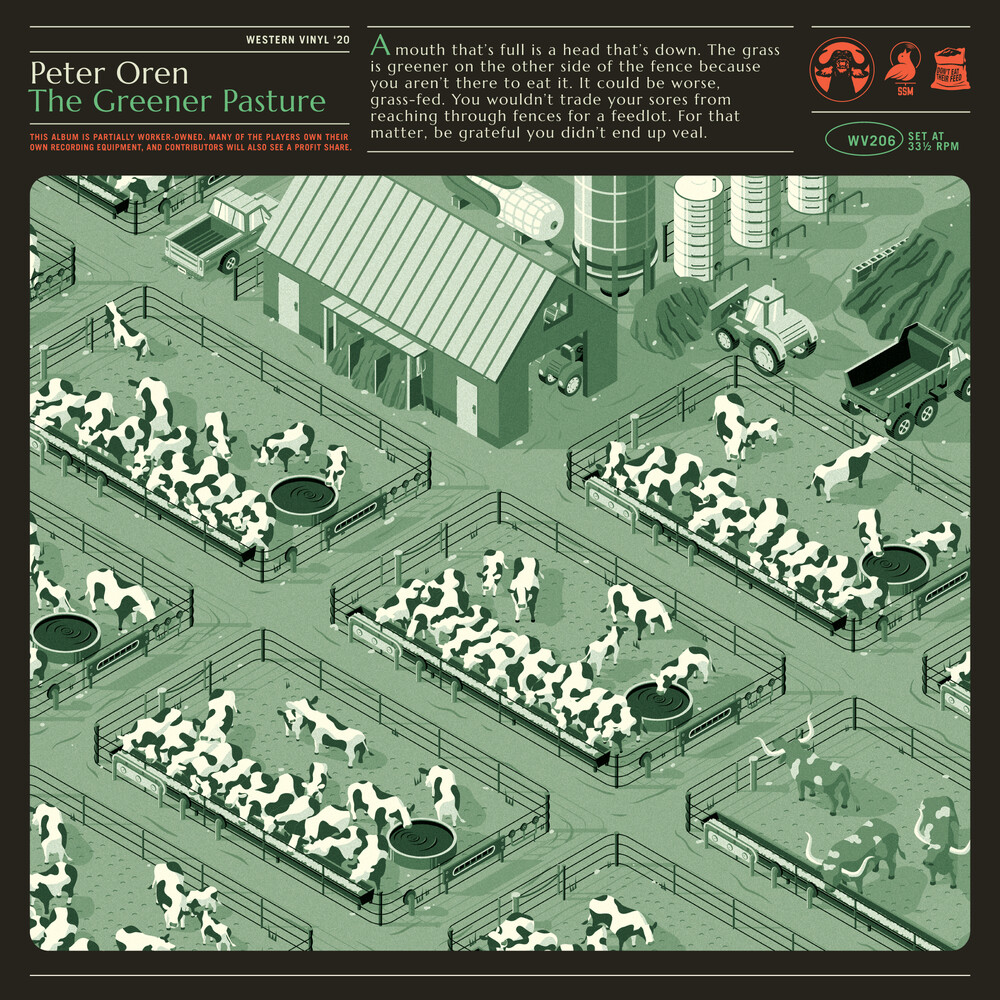 "The album art, made by my close friend Quintin Caldwell, is a farm scene made in the isometric style of a silicon valley tech company's marketing content. The cattle's enclosures are smart-phone shaped. "John Wayne" is a comment on American individualism and the characters that symbolize it. John Wayne's many, yet consistent characters and the consistent but multi-actored Bruce Wayne (Batman) serve as model citizens and vigilantes. They justify violence in fighting crime, or disrespect, while doing little to address underlying causes of injustice. I see in myself similar tendencies of false self-reliance despite knowing that collective effort will be critical to successful change. My previous album, Anthropocene, asks in the title track, "where will I go/ if I don't want to be/ with idle hands awaiting catastrophe/ here in the Anthropocene." The Greener Pasture offers a somewhat defeated answer to that question in it's own title track: "The greener pasture is also fenced in/ the wider trough has an asterisk/ rotate the herd every few days/ or is it every few years/ we got their tags on our ears/ standing in shit crying bovine tears." As cattle's comfort is often forgone, I've been uncomfortably seeking my role in a market economy that might allow me to contribute to necessary change in the system. Even those reluctant to acquiesce to the demands of the labor market such as myself are these days made valuable through their data and attention. Just as screens have reached beyond squared corners, up and around user-facing lenses, screens have spread beyond times square to capture the core of our culture and economy at a rapid pace. In the process of vying for a chance to call music my profession, I've writhed in the pain of isolation it's brought and sunk deeper into hermetic habits, buttressed by social media platforms that my more successful peers have somehow managed to excel using. Where others have managed to perform for the public, I have somewhat remained a private spectator, attached to systems I know well are designed to invade my time with promoted content and a false sense of connectedness. Whether sleeping in a hotel far from home or the back of a vehicle searching for nothing up a national forest road, my transience only sunk the hooks deeper. I hopped from one fill-in living arrangement to the next in anticipation of frugal touring sweeping me off my feet. I've largely neglected other skills except when necessary to pay bills. When I received my advance for a second Western Vinyl album, no other theme called me as much as an examination of phone use. I invested in equipment to record myself instead of studio time so that I could come closer to mastering the craft to which I've dedicated myself and simultaneously to capture and store as much value as possible from the advance, given the scarcity of revenue in my musical efforts. In the process I dove deeper into isolation and into my phone in a cabin in the woods, which had been made available on very friendly terms. Now that the work of recording is through, I am continuing to write for the next album but looking for the place to reinsert myself into the organic plane of existence. I signed a lease for a place of my own for the first time. I'm building wooden phone stands to sell as merch that will sport artwork intended to encourage users to leave their phones in one place while home-that isn't a pocket-such as to deter excessive phone use." - Peter Oren