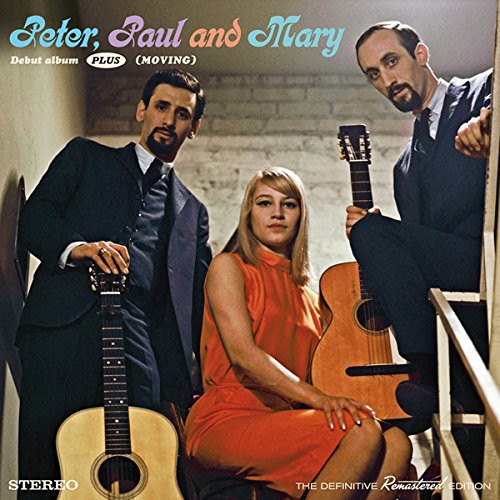 Digitally remastered two-fer containing a pair of albums plus three bonus tracks. The most popular acoustic folk music group of the 1960s, Peter, Paul and Mary mixed great songs with political and social activism. They brought folk music to a new prominence in the post-McCarthy era, putting lyrics about politics and morality on the radio amid the syrupy boy-girl love tunes that dominated the airwaves when the trio began playing together. This quintessential release features their first two albums, originally issued by Warner Bros. In the early 1960s: The splendid self-titled debut album, PETER, PAUL AND MARY and their follow-up LP, MOVING. The former record included original compositions like 'Early in the Morning' and 'Cruel War,' as well as a rendition of Pete Seeger's song, 'If I Had a Hammer' (a hit that was the first record to bring protest music to a mainstream audience), while the latter boasted such highlights as the haunting 'Pretty Mary,' the beautiful 'Flora,' the startlingly intricate 'A' Soalin',' and the smash 'Puff, the Magic Dragon.' Both LPs have been remastered and packaged together in this special collector's edition, which also contains 3 bonus tracks (covers of Bob Dylan, Blind Lemon Jefferson, and Reverend Gary Davis) recorded live during that same period.