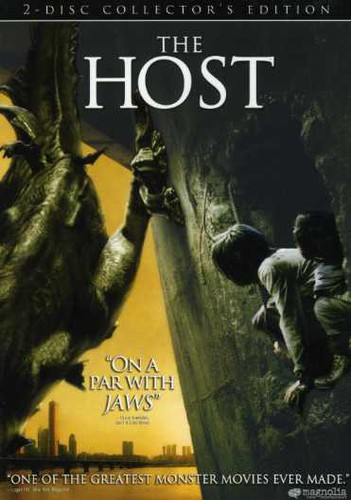 Bon Joon-ho's THE HOST is a giddy revelation - ain inspired and unexpectedly moving contribution to the monster movie genre. Several years ago, a crooked government official from the United States ordered the dumping of toxic substances into Seoul's River. Years later, the hapless Gang-du is working at his father's food stand along the river, caring for his bright daughter Hyun-seo. But one day, a monstrous creature emerges from the water and embarks on a murderous rampage throughout the community, swallowing Hyun-seo whole. Gang-du's bullish younger brother Park Nam-Il and sister Nam-joo condemn him for being such a failure, while their father angrily chastises them for being so cruel. But when Gang-du receives a phone call from Hyun-seo, the family must band together to reclaim her. Unfortunately, at this stage, the government has announced that the monster is the host of a dangerous virus, and anyone who has come into contact with it - namely Gang-du - must be isolated. As the monster continues to wreak havoc on Seoul, Gang-du, his father and his siblings must work together to bring Hyun-seo home. Director Joon-Ho Bong Star Kang-ho Song, Byun Hee-bong Special Features: Full Frame Format.