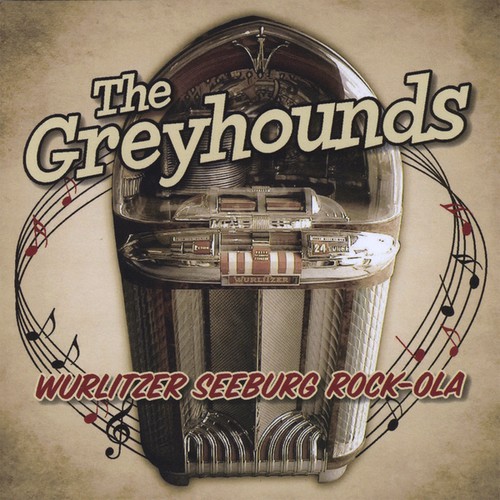 The Greyhounds are a five-piece rock & roll band based out of Poughkeepsie, NY. Formed by veteran roots-rock musicians from New York City and the Hudson Valley in 2001,the Greyhounds have been thrilling audiences at clubs, car shows and festivals throughout the northeast ever since. Never content to simply reproduce faithful covers, they infuse the dance sounds of the late 40's through the early 60's with an edgy street vitality that brings the spirit of old-time Sock Hops to the 21st century. Experiencing a Greyhounds show is like being a teenager hearing rock & roll for the first time - you can't sit down. Their new release ''Wurlitzer Seeburg Rock-ola' is a heart-pounding, toe-tapping tribute to the Golden Age of the Jukebox. It combines the band's originals with choice cover tunes that 'oldies' radio has long forgotten.From the opening boogie-woogie riff of ''Wurlitzer Seeburg Rock-ola'' to the final reprise of the gospel fueled rocker 'Saved' this disc never let's up.'' We had a blast making our record'', says band leader Stuart Millman, ''and I really feel it comes across that way after listening to it.' Recorded in Hurley, NY at LRS Studios, these 14 tracks capture the live energy that the Greyhounds produce on stage, resulting in a fun, exciting and dynamic CD for all to enjoy...