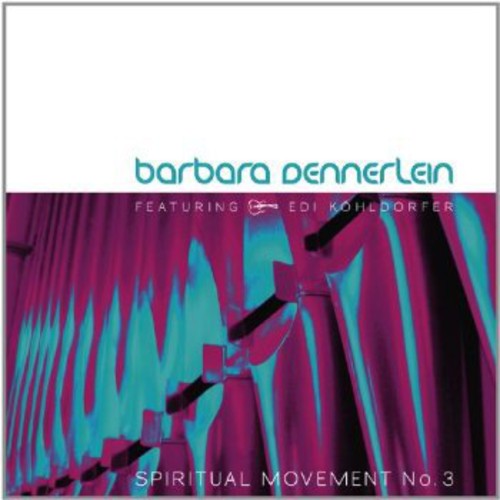 BARBARA DENNERLEIN - SPIRITUAL MOVEMENT NO.3 Bebab Records 250976 The master of the Pipe Organ in a jazzy dialogue with guitar. A musical highlight at the Stadtpfarrkirche in Fehring/Austria. Barbara Dennerlein Rieger-Organ & Synthesizer Edi Köhldorfer Guitars Check out Barbara Dennerlein's new CD 'Spiritual Movement No. 3'. It is Barbara's 26th CD and it's her third recording featuring a pipe organ, the Queen of Instruments. Almost two decades ago the organist began to get in touch with pipe organs in churches and concert halls and since then she has gained an outstanding world-wide reputation and success with her concerts. This new CD is a milestone that marks her way beyond the instrument's traditional expressiveness, creating new paths of exciting dialogues between pipe organ and guitar. Listen to Barbara's magic performance on the 'Rieger' organ that unleashes overflowing richness of sounds and phenomenal grooves. With discreet support by synthesizer she has created a brand new sound-scape, giving new life and magnificence to the orchestral character of her compositions. With her open mind for new developments in music -and not only in jazz- she opens doors for the pipe organ and once again plays the role of a pathfinder for innovation in music. With her brilliant technique, her ambidextrousness of hands and feet and her own unique compositions, she has created an innovative and unmistakable style over the past three decades, opening new dimensions for the Hammond organ which had been neglected in jazz for far too long. Her music was, and still remains, unique and outstanding. It's largely to her credit that the organ has regained prominence in jazz - not only the Hammond but now also the pipe organ. Samir H. Köck, music journalist, Die Presse, Vienna had this to say: "Germany's most famous female Jazz export, the magnificent Barbara Dennerlein, renowned for her virtuosity on the Hammond B3, has been performing more and more concerts on pipe organs in recent years. At the Austrian festival "Most & Jazz", presented by Toni Eder, she bedazzled the audience demonstrating the kind of groove the massive pipe organ is capable of. Together with the formidable guitarist Edi Köhldorfer, Barbara thrilled the audience with passion, high energy and technical brilliance. This exhilarating concert has finally been captured on this CD, and will delight the listener with sublime ecstasy of tonal colours and delicate groove. This performance with it's spirituality and earthiness, united in such a sophisticated way, is a great moment that would be a shame to miss."
This website uses cookies to personalize content and analyse traffic in order to offer you a better experience.
I accept Learn More
back to top