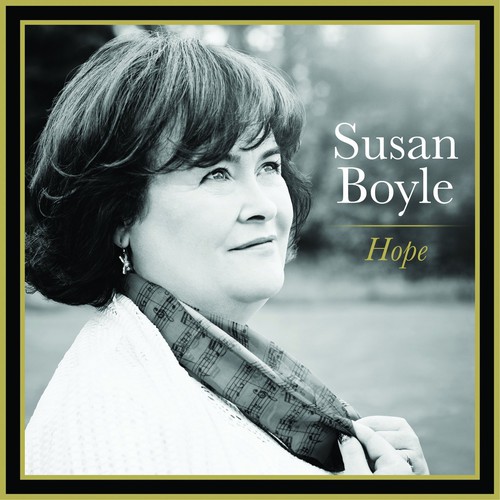 Hope, heralds a new era of music for Susan Boyle, where ballads marry with uptempo songs. Susan's raw and powerful vocals ranging from the ethereal to the dramatic are showcased in her own inimitable style. Featuring breathtaking renditions of Pink Floyd's,"Wish You Were Here'" and Simon & Garfunkel's "Bridge Over Troubled Water," Susan also fearlessly takes on the iconic John Lennon song, "Imagine" giving it a new identity.

Talking about the record Susan said, "I have really enjoyed making this album. I had a huge input in music suggestions and finally have been able to record one of my all time favorites, "Angel," originally by Sarah Mclachlan. I also am pleased to be able to sing some uptempo songs that show variation in my repertoire. There are also iconic songs, which were a risk to take on but I hope I've done them justice in my own way. John Lennon's "Imagine" was one of the hardest to record, not because of the music or the vocals but because I wanted to do his song justice. Of course the die -hard Lennon fans will probably criticize but I hope that people like my personal take on the song. I themed this album around inspiration and hope because those are two elements we all need in our life to drive us forward and inspire us to go out and capture our dreams- they worked for me after all."

Susan continues to defy expectations with her globally successful career. This astounding sixth album is set to once again remind people of the voice the world fell in love with in 2009, when she stepped on to the Britain's Got Talent stage, with hope and a dream. Best known for her element of surprise and a powerful and heart stopping voice, Susan has become a global top selling artist. With phenomenal album sales, record breaking achievements and multi platinum chart domination, sold out UK tours as well as feature film roles- Susan has come a long way from the Britain's Got Talent stage in 2009. To date her previous five albums, I Dreamed a Dream, The Gift, Someone To Watch Over Me, Standing Ovation and Home For Christmas have sold over 22 million copies and stormed to the top of the charts in over 30 countries.