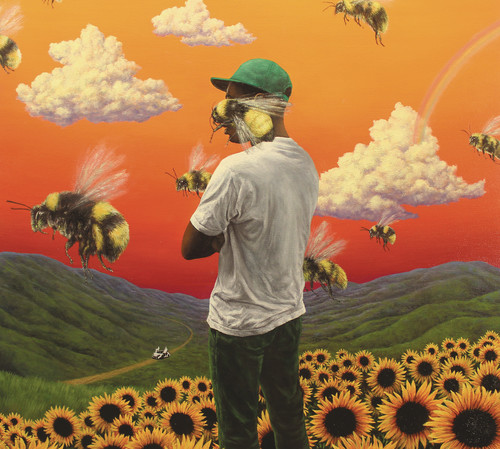 FLOWER BOY, is the new and long awaited album from Tyler, The Creator. The album follows up 2015's Cherry Bomb, and is available digitally and on CD. The first track and self-directed video to be released from FLOWER BOY was "Who Dat Boy" featuring A$AP Rocky, along with a second track "911/Mr. Lonely," which feature Steve Lacy and Frank Ocean, respectively. FLOWER BOY is a 14-song album, and the physical version of the CD features two unique covers, the first one designed by Tyler himself and the other by artist Eric White. It is only fitting that Tyler would commission White, whose paintings have been described by Leah Ollman of The Los Angeles Times as being "nostalgic and at the same time also vaguely futuristic, even dystopian," to visually articulate the world of FLOWER BOY.